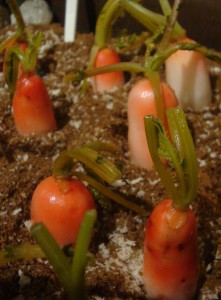 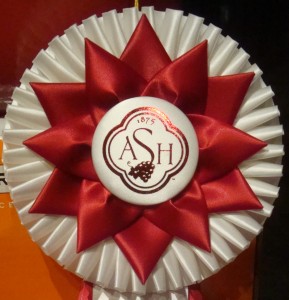 We were pleasantly surprised when our favorite pairing that night won a First Place ribbon in the competition. The delicious wine was Trinchero Napa Valley’s 2011 Central Park West Petit Verdot, from winemaker Mario Monticelli, served with a Garden Radish with Beef and Blue “Butter” from CIA Student Chefs Ryan Paternostro (New Orleans, LA) and Nick Sobiek (Reno, NV).   They created their dish by pickling French Breakfast Radishes, stuffing them with a combination of Bone Marrow and Gorgonzola Dulce, and then garnishing the radishes with Dark Rye Bread Crumbs.  Visually, the presentation was a charming “planting” of the radishes in Rye Bread “dirt.” 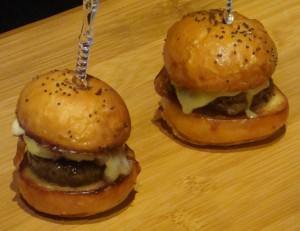 In the other race, the winner of the competition for wines paired with dishes created by restaurant chefs, caterers, and winery executive chefs turned out to be the double threat of Del Dotto Vineyards’ 2012 St Helena Mountain American Oak U-Stave Block 2 Cabernet Sauvignon from winemaker Gerard Zanzonico and Black Truffle and Bacon Wagyu Sliders from the winery’s Executive Chef Joshua Schwartz.  The winery also served up some tasty Bresaola and Smoked Coppa.

Keep reading and we’ll tell you more about our favorite wines and dishes that evening.  To deepen your own understanding of this region’s offerings, please check out the wineries, their wines, and some of Napa Valley’s outstanding Chefs. We’ve also got plenty of student chefs whose career progressions you may want to start tracking.

At bASH 2015, it was clear once again that a lot of thought (and effort) had gone into the chefs’ creations of delicious and well-executed food offered alongside the wines.  There were 31 (!) Food and Wine Pairings at bASH 2015 and we’ve listed our personal favorites below (in addition to the two winners described above). Each time, we were impressed three ways: the wine itself, the food alone, and how well the elements of the food offering complimented the flavor nuances of the wine. 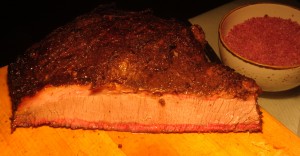 Other Favorite Foods at bASH 2015

In addition to the dishes described above, we especially enjoyed these other small plates during the bASH event as well: 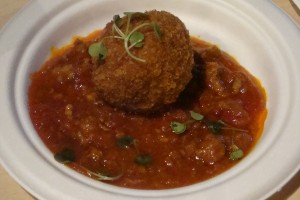 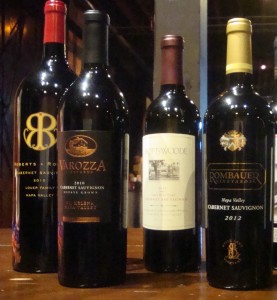 If you are looking for excellent current wines from the St. Helena Appellation, we found many at bASH 2015 and highly recommend you seek these out in stores, at a restaurant, or from the wineries themselves. Please follow the links below to the wineries’ websites to learn more about wine availability and whether or not the winery has a tasting room open to the public. We’ve included the wines listed above, as well as our other favorite wines that the ASH wineries were also pouring that evening: 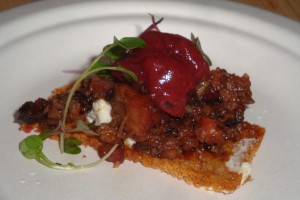 For the fourth year in a row, we had a terrific time at Appellation St. Helena’s bASH, a convenient way to try wines from the appellation all conveniently gathered into one location. The wines were outstanding, many of the dishes made us want seconds, and we were excited to find highly effective and interesting pairings of food ingredients and spices with the flavor components of the wines they were partnered with.

Appellation St. Helena is a non-profit organization of over 50 winery and grape grower members who actively promote their wines and the local community through charity events, wine tastings, and community involvement. If you are interested in learning more about the organization and its activities, or to be one of the first to hear about bASH 2016, we encourage you to go here to get onto ASH’s mailing list.