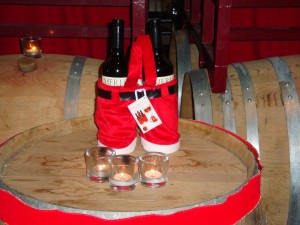 If you are in the Yountville area this weekend, there are two Holiday Open Houses on December 17th offering free wine tasting and some tasty bites at the same time.  If you are feeling very celebratory, you can easily do both.

Wines served will include the 2010 Napa Valley Chardonnay, 2006 The Pinot, 2006 The Poet (a Meritage
comprised of 80% Cabernet Sauvignon, 12% Cabernet Franc, and 8% Merlot), and their 2007 The Franc.  Appetizers catered by All Seasons Bistro will be Red Wine Marinated Lamb on Baguette with Caramelized Onions and Roasted Red Peppers, Truffled Mushroom and Pumpkin Timbales, and Parmesan Palmiers with
Roasted Peppers and Sun Dried Tomatoes.  The event is complimentary, but RSVP is requested through the events coordinator, Caitlin Catelli, at (707) 291-2864.  7415 St Helena Highway (Highway 29), Yountville  (707) 921-2809

Wines served will include the 2010 Russian River Chardonnay, 2009 Artistry (a Bordeaux blend based on 56% Cabernet Sauvignon), 2009 Mixed Blacks (field blend based on Zinfandel and Rhone varietals), and their 2006 Diamond Mountain Cabernet Sauvignon.  Food treats provided by Out to Lunch Catering will be Crab and Shrimp Crostinis, Lamb Sausage Skewers with Dried Cranberries and Pistachio, and Nuts Foie Gras and Water Chestnut Stuffed Mushrooms.   The event is complimentary.  6795 Washington Street, Yountville  (707) 968-9297