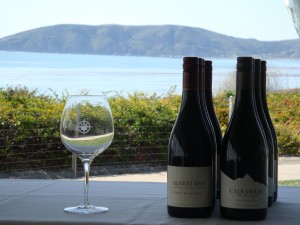 A Scene from the 2012 World of Pinot Noir

Earlier this month, we had the extreme pleasure of participating in two days of Grand Tastings at this year’s World of Pinot Noir Festival held in Shell Beach, California.  With over 180 winery participants, we expected to be reminded of why we love some of our favorite Pinot Noir producers (Bergström Wines, Drew Family Cellars, Freeman Winery, Keefer Ranch Wines, Robert Sinskey Vineyards,  and Talley Vineyards).  We were also hoping to discover some new wineries at WOPN and we were tremendously successful in that.  However, what we didn’t expect and were truly surprised at were the quantity and quality of food provided during the Grand Tastings.  Keep reading, and we’ll share with you the highlights of the 2012 World of Pinot Noir.

Favorite Wines at the 2012 World of Pinot Noir

These are the wines we were most impressed by during our two days of wine tasting.  Several of the wineries below already represent a sizeable portion of our wine cellar but many of them are places we have not visited yet so our “To-Do” list has increased significantly.  Some of the wineries listed below only make one wine per year and we really liked it.  In other cases, wineries were pouring several wines but we’ve only listed the ones that stood out comparatively at the event.

If you are a fan of Pinot Noir and haven’t tried these wines yourself, we recommend you check out the wineries and/or try to look for these wines in your local wine stores, restaurants or online:

The Food at the 2012 World of Pinot Noir

There were three primary food purveyors at the 2012 World of Pinot Noir and each did an outstanding job regarding the volume of food available throughout the entire event as well as the quality of the offerings. 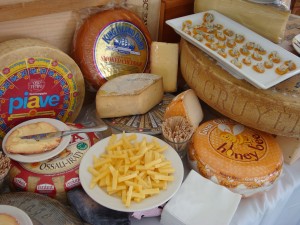 Kent Torrey from The Cheese Shop of Carmel offered a cheese display to end all cheese displays.  This was our first time attending the World of Pinot Noir, and we thought it was nice that the WOPN website and press releases made such a big deal about Mr. Torrey and his cheeses being part of the Grand Tasting.  It wasn’t until we actually went to the event, entered the tent and witnessed the enormous display backed with a half dozen knowledgeable and friendly Cheese Shop personnel that we understood the attention.  Cheese fanatics could have probably spent hours sampling the offerings here and barely missed the hundreds of wines only a few feet away.

Central City Market from Santa Maria was offering plenty food at the Grand Tasting, and their food selections went beautifully with the Pinot Noirs being poured throughout the tents.   Some of our favorite offerings were Duck and Cherry on Sweet Potato Biscuit, Roasted Pear and Blue Cheese Spread with Endive, Mexican Red Chile Lamb on Tortilla Chips, Charred Medium Rare Steak Tartare, and 5-Spiced Pork Belly on a Crispy Won Ton Chip. 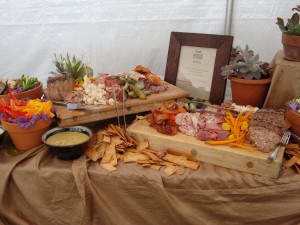 Succulent Café and Trading Company from Solvang had several food displays in the main tent and if you were craving something that wasn’t on the Central City Market table, you could probably find it on the Succulent Café side.  Out of their options, we preferred the Tamarind Grilled Shrimp, Prosciutto Wrapped Figs, Duck Confit Sliders, House Cured Salmon with Herb Crackers, and Fresh and Pickled Vegetables with Red Pepper Hummus.

All in all, the World of Pinot Noir Grand Tastings were a delightful opportunity to taste some of the best Pinot Noir available in the world, consume delicious food offerings which paired with but didn’t overwhelm the wines, and bask in a glorious seaside atmosphere.  It’s on our calendars for 2013 already, and you should seriously consider attending it yourself.  Next year’s event will be March 1-2, 2013, and you should go to the World of Pinot Noir’s website here to find a link to sign up for their newsletter so you can stay up to date on next year’s details as they unfold.