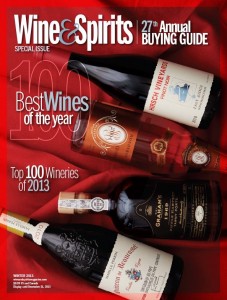 Last week, we had the extreme pleasure of attending the Wine & Spirits Top 100 Tasting in San Francisco.  This special event honored wineries from around the world that delivered the best overall performance in Wine & Spirits Tastings throughout the past year.  These Top 100 Wineries and their top scoring wines are profiled in the Wine & Spirits 27th Annual Buying Guide (now available for purchase).

When there is a wine and food event based on the top 100 wineries in the world and almost every winery brings at least two wines to pour, you know you’re going to have a great time.  Throw in passed hors d’ouevres  and small plates from Bay Area restaurants and food purveyors and the evening is made.  The indoor/outdoor tasting venue and lovely weather just added to the enjoyment. 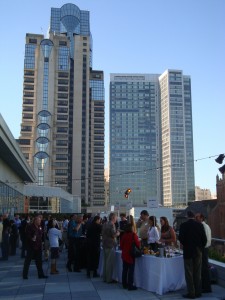 The bar was set pretty high, but we’ve listed below the wines and small bites we felt were tasting particularly well that night.  If you get the chance, please seek these vendors out so you can enjoy the fruits of their labor as much as we did.

Coqueta – This new restaurant from Chef/Owner Michael Chiarello and Chef de Cuisine Ryan McIlwraith was an instant hit.  Coqueta means “flirt” or “infatuation” in Spanish and the menu offers the restaurant team’s exploration and interpretation of Spanish cuisine.  During the Tasting, they were serving a tasty Heirloom Tomato Gazpacho with Arbequina Extra Virgin Olive Oil.  Pier 5, The Embarcadero, San Francisco  (415-704-8866) 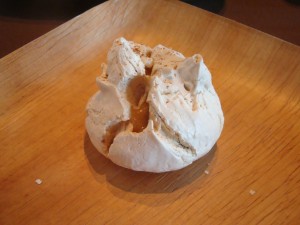 Farm Shop – This popular restaurant and specialty grocery store in Santa Monica branched out into Marin County in May 2013 with a restaurant in Larkspur.  The food here is farm-to-table California focused, headed by Chef/Owner Jeff Cerciello.  We were amazed at the unique and delicious offering of an Apple Spice Meringue with Brown Butter Curd, and desperately want the recipe.  2233 Larkspur Landing, Larkspur (415-775-6700) and 225 26th Street, Suite 25, Santa Monica (310-566-2400) 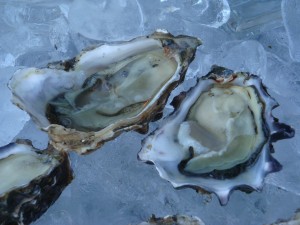 Hog Island Oyster Company – This Bay Area favorite leases 160 acres in Tomales Bay where they raise over 3 million Pacific, Kumamoto and Atlantic oysters per year as well as Manila clams and mussels.  Hog Island was so busy shucking and serving Fresh Oysters they had two separate stations on the patio next to where Champagne was being poured at the Top 100 Tasting.  The Hog Island Traveling Oyster Bar shows up at many Bay Area food and wine events, the Hog Island Oyster Farm is in Marshall (20215 Shoreline Highway, 415-663-9218), and there are Hog Island Oyster Bars in San Francisco (One Ferry Building, 415-391-7117) and Napa (610 First Street at Oxbow Public Market, 707-251-8113) 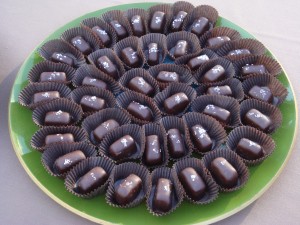 Kika’s Treats – Based in San Francisco, Kika’s manufactures premium chocolate-covered confections including Shortbreads, Graham Crackers, and Honey Cakes.   They use only the finest quality locally-sourced ingredients and an array of alternative sweeteners (no white sugar and no corn syrup).  We couldn’t get enough of their Salted Crunchy Caramels (made with Coconut Palm Sugar and Puffed Brown Rice, then covered in Bittersweet Chocolate and sprinkled with Sea Salt) and they also make a Nutty Caramel using roasted Oregon Hazelnuts.   No storefront, but products are available online or at many Northern California markets (as well as some specialty stores in Massachusetts, New York and Wisconsin). 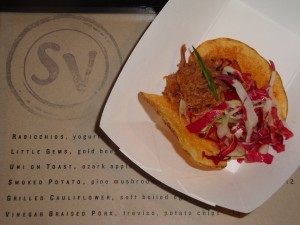 All in all, the 2013 Wine & Spirits Top 100 Tasting Event in San Francisco was a spectacular evening.  We can’t wait for next year’s production (their 11th), and strongly encourage you to attend.  If you don’t live in the Bay Area, this is definitely an occasion worth planning a future trip around.